Sky-high increase in prices of essential commodities of daily use:

There is hue and cry across the country due to an unprecedented hike in the prices of essential commodities of daily use in almost every household. A comparison of few such items indicating the price increase over the first three years (Aug 2018 vs Sep 2021) of PTI government would give a clearer picture; for example:

Fuel to fire is supplied continuously by the PTI government to retain high inflation since came in power in 2018 as has been witnessed a week ago through announcement of official increase in the prices of petroleum products and cooking oil together with levy of more regulatory customs duties on large number of imported items.

These figures give a very grim picture of how miserably PTI government has failed in maintaining the price stability which it inherited in 2018 from PMLN government. In the last three years, most indices indicated double digit inflation during the period 2018-2021, compared to low single digit maintained by PMLN during the period 2015-18. A simple addition of annual inflations across all the three indices shows the PTI‘s inflation on average was 10% per annum or more against less than 3% of PMLN’s.

Most worrying area is “food inflation” which was under 2% when PMLN government completed its term in 2018 but same reached 24% in rural and 19% in urban in Nov-Dec 2020 during PTI’s government and unfortunately it still remains high in double digits.

The latest annualised inflation number of 14.48% for last week released by the Pakistan Bureau of Statistics (PBS) is extremely worrisome as it indicates that there is no hope for the containment of this menace in the near future.

The suffering of Pakistanis due to high inflation during 2018-21 is not surprising when viewed in the backdrop of the major follies committed by the PTI government in its first three years, which are briefly discussed below:

At the outset, PTI government exaggerated the ill effects of current account deficit. Consequently, it undertook a massive devaluation of 40% in two years which resulted in steep decline in current account from $19.2 billion in 2017-18 to merely $2 billion in 2020-21. This was nothing short of slaughtering and grounding the economy. In the first two years (2018-2020), LSM declined by 3% and 10% respectively as importing industrial raw material became too expensive.

Sadly, PTI team failed to comprehend that loss in the value of rupee makes life of common man miserable as it is always one of the major causes of high inflation.

The fact that this was an unthoughtful policy is evident from the fact that much of adjustment fell on imports from $56 billion to $43 billion, a knock down of 25% in imports. Ostensibly this was done in the name of removing the import bias in exchange rate hurting exports as propagated by spin-wizards who have long disappeared from the scene on this account. The exports in PTI’s three years have increased from $24.8 billion in 2017-18 to $25.6 billion in 2020-21. So all told, increase in exports in three completed fiscal years is only $800 million. Is this sum a worthwhile compensation for a staggering 40% devaluation of rupee? It would be hard to find another example of such colossal loss of national resources and the ill effects that the nation still continues to suffer.

The rupee devaluation also led to an unbearable rise in domestic prices as most critical imports such as petroleum products, electricity, gas and edible oil became very expensive and contributed to high inflation. In addition, the foreign (external) debt and its interest payments also became unbearable. In addition, an amount of over Rs 4,000 billions has been the capital loss through increase in the public debt due to devaluation.

Another folly committed by PTI government was the steep rise in interest rate. The policy rate was almost doubled within a period of one year, from around 6% to 12% and subsequently to 13.25%, where it was kept for nearly a year. It is claimed by the State Bank of Pakistan (SBP) that it was targeting headline inflation as well as forward looking policy to remain ahead of inflation. These two things resulted in a massive rise in interest payments, which jumped from Rs.1.3 trillion in 2017-18 to Rs.2.6 trillion in 2019-20, in just first two years of PTI’s government. The shift led to around 5% real interest rate (difference between policy rate and headline inflation) for about one and half years (Nov 2018 to May 2020). This alone gave an estimated benefit to the banks and financial institutions of Rs 450 billion during this period. High interest expenditure resulted in increased fiscal deficit which created a compounding effect of increase in public debt. The fiscal deficit of 8.9% and 8.1% was recorded in the first two years of the PTI government and the Public debt, as % of GDP, rose from PMLN’s 72.5% in 2017-18 to PTI’s 85% and 87% in 2018-19 and 2019-20, respectively.

Following the global outbreak of Covid-19 pandemic when the whole world reduced the interest rates to support their economies and people, SBP reluctantly reduced in phases the policy interest rate from 13.25% to 7% within a quarter, sometime holding multiple monetary policy committee (MPC) meetings within a month which are otherwise held once in every two months. This lowering of interest rate moderated the rising interest payments which grew only by 5% during 2020-21 and the fiscal deficit reduced to 7.1%; Public Debt to GDP accordingly adjusted downwards to 83.5%. But this fiscal deficit is still too high for controlling inflation. In its presence, PTI government is deluding itself by thinking it is focusing to control inflation.

The PTI government happily adopted the budget presented by the PMLN government in May 2018, except for cosmetic changes, but it failed to achieve any of the key budgetary targets. The fiscal deficit, as noted above, ended up at 8.9% although it was budgeted at 4.9%.

When the government finally decided to enter into an IMF program in June 2019, the Fund set an unrealistic target for FBR revenue collection. In 2018-19, FBR collection was only     Rs 3,829 billion even though the target was Rs 4,300 billion, indicating a negative revenue growth after 23 years. Despite such low yields, the PTI team agreed with IMF to achieve a tax target of Rs 5,550 billion for 2019-20, which amounted to a nominal increase of Rs 1,721 billion or 4.5% of GDP, which was simply ridiculous. For this purpose, new taxes of Rs 735 billion were imposed on the people in order to achieve said unrealistic revenue goal. FBR collection for 2019-20 was Rs 3,998 billion which included Rs 100 billion supplementary grant from the Federal Government for payment of tax refunds which otherwise were due to be paid by FBR out of its revenue collection; therefore the actual FBR collection was Rs 3,898 billion. This was a horrendous revenue performance which turned out the budget deficit to 8.1%. During the third fiscal year 2020-21, there has been an increase of 21% in taxes collection, making an average annual growth of 7% in first three years of PTI.

While the PTI government failed to achieve its tax targets, yet they contributed heavily, through interest rate hike and massive devaluation, in accelerating the price increases across the board resulting into high inflation. Concurrently, it had an overall negative effect on GDP, the growth.

Never in Pakistan’s history the nation has witnessed mega scams run by mafias associated with the government of the day such as sugar, flour, petroleum products and medicines etc which jacked up the prices of these items to an extent where the people have been forced to pay annually thousands of billions of rupees extra to buy the same quantities of goods and utilities.

Buoyed by some growth in 2020-21, the PTI government has already embarked on an expansionary path. In two months (July-August 2021) the current account deficit has already shot up to $2.3 billion. They also want to remain in the IMF program. But then Fund would demand austerity by slowing down the economy, leading to further rise in electricity prices, cutting down PSDP and more adjustments in interest and exchange rates. With such changes, the goals of accelerating the growth and controlling inflation would be off the table.

Non-existence of prudent, pro-active and constructive economic policy well supported by fiscal discipline and anti-inflationary measures has landed the people in a state of unbearable inflation.

The afore-discussed major mistakes, all PTI government’s own making, have contributed to an unprecedented hike in inflation, particularly prices of food items and utilities. With follies made by the PTI government, there is no case for PTI to complain about imported inflation. The pain and misery inflicted on hapless people in the first three years of PTI’s government under the leadership of Imran Khan through insane 40% rupee devaluation, imprudent interest rate management, heartless heavy taxation and mafias-pushed price increases of essential commodities has caused severe unrest in the people who have started protesting throughout the country against the unparalleled inflation (mahngaee) in the chequered history of Pakistan. 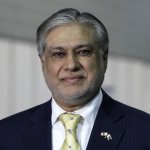 Mohammad Ishaq Dar is a UK Fellow Chartered Accountant; he is the former Finance Minister of Pakistan and former Leader of the Opposition in the Senate of Pakistan.

The Thursday Times is a contemporary media firm dedicated to publishing a wide range of stances and editorials from the worlds of politics, tech, and more from a whole slew of writers with experience discussing their expert opinions in globally-published mediums such as Jang, Naya Daur, Voice of America (VoA) and more.